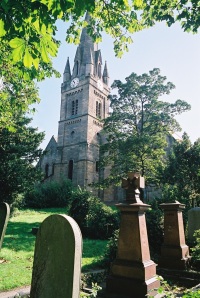 St James’ Church and graveyard were consecrated in 1832.   The churchyard originally consisted only of the land between the church and the vicarage, and the earliest graves are therefore to be found in this area.  It was extended in 1858 because of the large number of burials – many from the workhouse.  Further land was added in 1899.  The graveyard was closed for burials in the 1960s and its maintenance is now the responsibility of the City Council.

The churchyard contains the graves of members of many rich and powerful families who used to live in and around Benwell in earlier years.  Probably the most famous of these was Richard Grainger, the builder and developer who was largely responsible for the re-development of Newcastle’s city centre in the 19th century.  Also buried there are hundreds of local residents who were not so wealthy or famous, including pitmen, local traders, and inhabitants of the workhouse which used to be on the site of the General Hospital.

The records of graves at St James’ became lost over the years.  However in 2009, the “Graveyard Group” was set up.  The group has been working to clear and tidy up the graveyard and has carried out the major project of mapping and documenting the graves and collecting information about the people buried there.  The bulk of this work is complete, but new and interesting discoveries are still being made.

There are over 625 marked graves in the churchyard but most of those buried at St James’ have no visible memorial.  Research on the burial records suggests that more than 12,300 people were buried there altogether.  The first recorded burial at St James’ was Elizabeth Clark of Benwell Colliery who died at the age of 5.  The last was Elizabeth Gubbins who died aged 79.

Can we help you?

We may be able to help you find out more about your family history or about local history by sharing our research with you.  We have a database of all of the burials which were recorded and where possible their location, and also copies of the burial records which are available for viewing by arrangement.

Can you help us?

A guide to the graveyard has been produced which includes information about some of the people buried there.   An electronic copy is available here [Graveyard Guide]

We need people to help by passing on information about family, friends and others who are buried at St James’.

If you are interested in supporting our efforts in any way, we would welcome your participation.  The Graveyard Group meets at the church on Wednesdays between 10am and 1pm.