St James’ Church opened for worship in 1833 as a Chapel of Ease in the parish of St John in Newcastle.  Chapels of Ease were Anglican chapels built for the convenience of remote parishioners.  St John’s Church was in the city centre, some three miles from the western reaches of the parish.

At that time, Benwell not was not part of Newcastle.  It was not until 1904 that it was absorbed into the city.  Back in 1833 it was a largely rural area of farms and big mansions and private estates.  There were several coalmines in the neighbourhood and a growing concentration of industries along the riverside, but the resident population of Benwell numbered only about a thousand.

The church was designed by John Dobson.  It was built on land donated by John Buddle, the famous mining engineer and colliery manager who is actually buried in St James’ churchyard in a vault designed by Dobson.  City centre developer Richard Grainger also lies in the churchyard in his family grave within an enclosure of Gothic-style iron railings.

The church has been extended and adapted several times since its original form.  It remains a historically significant and beautiful building, with many special features.  It is one of the few heritage buildings to have survived successive waves of clearance and re-building in Benwell.  However, the fabric of the building is in poor condition in many respects, and a feasibility study is currently underway to find out what is needed to reinstate it once more as a focal point of community life as well as a place of worship.

1830    – plans launched at St John’s Church, Newcastle, for Chapel of Ease in Benwell

1832   – consecration of church and churchyard

1858   – churchyard extended beyond original site between church building and vicarage

1884/5 – creation of new baptistry and tower with spire and clock, and choir vestry

What to see in St James’ Church

You can download our church guide by clicking here

Start your tour in the nave, which is at the centre of the building (see plan below) 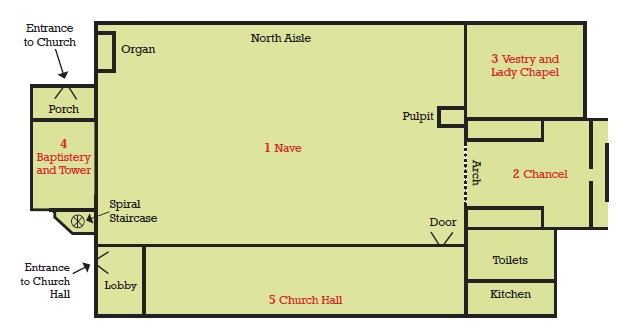 When you stand in the nave today, you are in the original Chapel of Ease, built in 1831-3 and designed by John Dobson.

The first of a number of enlargements was added in 1864.  A south aisle was added by replacing the south wall of the Chapel of Ease with a series of arches opening onto a new extension of the worship area to the south of the nave.  A chancel was also added, and the existing east wall was replaced with a chancel arch.  A centre aisle was introduced and the pews reorganised to accommodate 686 seats. The organ was relocated to the west end of the south aisle.

The north aisle was added in1903, by the architects Hicks and Charlewood.  This was created by converting the north wall of the church into an internal arcade wall linking the nave with the new north aisle.  With this extension, there was seating for 1,200 people.

Features of interest in the nave and north aisle include:

The chancel was built on to the original building in 1864 by creating an arch out of what was previously an outside wall.  The stained glass windows are worthy of note.  On the east wall is a set of three by William Wailes depicting scenes from the gospels.  Another window featuring Ruth is probably by HM Barnett, himself from a family of stained glass makers in York, who trained with Wailes in Newcastle and set up his own firm in Newcastle in 1858.  This window is dedicated to the memory of Mary Maughan who was the wife of the first vicar of Benwell, having previously been married to the nephew of John Buddle.

The altar was made for the church’s centenary service in 1932 by the prestigious firm of craftsmen woodcarvers established by the well-known painter and woodcarver, Ralph Hedley, and carried on by his sons.  Ralph Hedley was responsible for much of the woodcarving in St James’.

The chapel at the end of the north aisle, adjacent to the chancel, was added by the family of Sir Walter Scott, a local entrepreneur who was a major benefactor of St James’.  Originally known as the Lady Chapel, it is now the vestry.  Of note are two complementary windows by Atkinson Brothers of Newcastle, given in memory of Sir Walter Scott by his family, and a stained glass window depicting Jesus holding a child (probably by Barnett).

The baptistry was created in 1894 out of the original south entrance to the Chapel of Ease.  The dogleg staircase and gallery were demolished, and a tower arch was formed in the west wall of the church.  There is an interesting stained glass window, possibly by the Percy Bacon Brothers of London, showing the figure of St James and dedicated to the memory of another 19th century vicar of Benwell, Francis Bromley.  A more recent addition is a 1950s stained glass window with the inscription “Consider the lilies of the field how they grow” (although there are apparently no lilies in the picture)

Also in 1894, a spire with clock and spiral staircase were added to the tower.  During the Second World War the cable of a barrage balloon removed the top 20 feet of the spire, necessitating major repairs.  The church bells are still in use, although less frequently than in the past.  This is a rare peal of bells by Charles Carr of Smethwick, of which the tenor bell weighs 15cwt.  Charles Carr made church bells and gun barrels, including its largest bell for the Roman Catholic cathedral in Demerara in the West Indies, and bronze guns for the King of Siam.

End your tour in the church hall.

This room was created in 1980 by infilling the arches with a glazed partition and reorganising the pews.  This space then became the church hall, replacing the previous St James’ Church Hall in Atkinson Road, which was sold to build flats.

A suspended ceiling was fitted at the time of the conversion.  This has recently been removed, exposing the original wooden ceiling.

The church hall suffers badly from damp, in common with several other areas of the building.  However, there are several fine 19th century stained glass windows including at least two more by William Wailes, one of which commemorates the first vicar of the parish of Benwell.  Another window by HM Barnett, depicting King David, is dedicated to the memory of Thomas Wailes, who was organist at St James’ for 23 years.